The group of companies specializes in the development of ultrasonic technology and software systems for enhanced oil recovery and own dozens of patents. Engineering company awarded with diplomas of Russian and international exhibitions.

Sonovita LLC – R&D, manufacturing of ultrasonic equipment. Company has hold a status of the  Skolkovo Innovation Center participant since 2018.

Sonotech LLC – Services with permanent treatment solutions on territory of Tatarstan republic from 2014.

From 2012 to 2015 more than 100 treatments were carried out in Russian Federation by Centre of Ultrasonic Technologies. Liquid 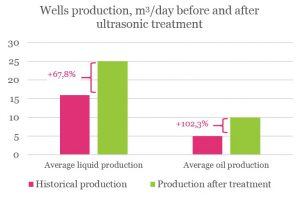 flowrate of the wells prior to treatment ranged from 0 to 36 m3 / day, after treatment - from 4 to 63 m3 / day, the effect of the treatment lasts from 3 to 12 months. Average oil production growth on the wells amounted to 102.3 %, which corresponds to a doubling of productivity.

At the same time, wells were not exposed to the damage by acidizing and multiple perforation that helped to preserve the original borehole conditions and the properties of the near-wellbore formation, in this way, unlimited multiplication of ultrasonic treatment and the absence of negative effects is certainly a unique feature of the technology.

Permanent ultrasonic treatment of wells with high viscosity has been tested at low producing wells of Green River Formation, USA. This field was selected for pilot tests because represent traditional hard-to-recover oil deposits. By results of pilot test of Russian technology of ultrasonic treatment US Department of Energy made following conclusion: 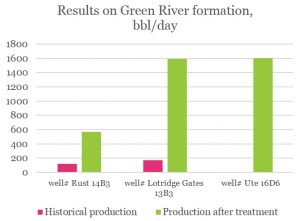